Rackets is maybe the ultimate racket game. Intimidating to some, its challenging pace and gameplay is a rewarding test of skill.

It was developed in the 18th century in two of London’s big debtors’ prisons: the King’s Bench and the Fleet. The prisoners, apparently, wanted to speed up the game of fives, which is played with the palm of the hand, by using (real) tennis rackets.

Seacourt has one of only about 20 courts in the UK, most of which are either in public schools or privately owned.

Like real tennis there have been moments in the last century when rackets might have fallen by the wayside but now with new courts being built, it deservedly enjoys modest positive growth. Our members meet regularly on Thursday nights to play. Come along and join us. 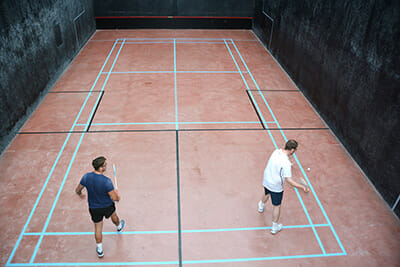